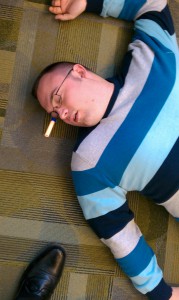 Death by Foam is the brainchild of Ellis Benus, aided by several great minds, to build the best Nerf guns for all Foam Warfare.

The quest for a better Nerf gun started when I, Ellis, got involved in a new years eve Nerf war at my church last year.

After seeing all of the available, off-the-shelf, Nerf guns I was woefully disappointed. The best guns were almost $50+, they were cheap, easy to break plastic, and most importantly, their rate of fire and distance was terrible. Finally, the high capacity semi- of fully-automatic versions had magazine systems which would take a very long time to reload.

I had no intention of dropping  more than $50 on one of these sub-par guns. Thus began my journey to build the best gun possible.

After searching Google relentlessly I found the HAMP, High Airflow Manual Plunger, design which Death by Foam now uses for all of our guns.

The HAMP design is incredibly simple, durable and most importantly, effective!

Our Death by Foam HAMP guns, built out of high grade plastic tubing, shoot much farther, faster and more accurately than any Nerf gun on the market. The HAMP’s magazine system is insanely simple and fast to reload. Magazines of 5 are the most common, but 10, 15 and more are available.

With only one moving part on the entire gun, the Death by Foam HAMP’s are almost impossible to break and replacing broken components (tactical role anyone?!) is simple and inexpensive. You could nearly drive over our guns with your car, and they will still function. Try that with a Nerf gun and you’ve got a very expensive pile of plastic parts.

Leave your gun in the rain, snow and dirt for a few months? No problem! Dry fire it a couple times to clean out the barrel and you are good to go.

Death by Foam guns can fire ANY Nerf dart!

The HAMP guns we build utilize a straight, stack magazine. You simply stack darts inside and plug the magazine (“clip”) into the top of the gun. This allows you to use your favorite Nerf darts. You can even mix which darts are in a magazine. Your Death by Foam HAMP does not care what ammo you use, just feed it and your enemies will fall!

Any Death by Foam gun can be painted any color, and nearly any logo or design you desire can be put on your gun. No more vanilla, stock guns that all look identical. Make yourself known with the best and baddest Nerf gun in the world at any Foam War or Human vs. Zombies game!